Born in 1985, she started singing at the age of 7 winning a song festival organized by the parish where she lived. At the age of 14, she began to sing fado, joining the cast of several fado houses.

She made several shows in the “Espaço das 7 as 9” at CCB. In 2006 she was invited by Maria da Fé to join the cast of “Sr. Vinho. In 2008, she performed the “Grande Marcha de Lisboa” at authors José Luis Gordo and Arménio de Melo's invitation. 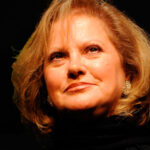